Migena And The Frozen Roses 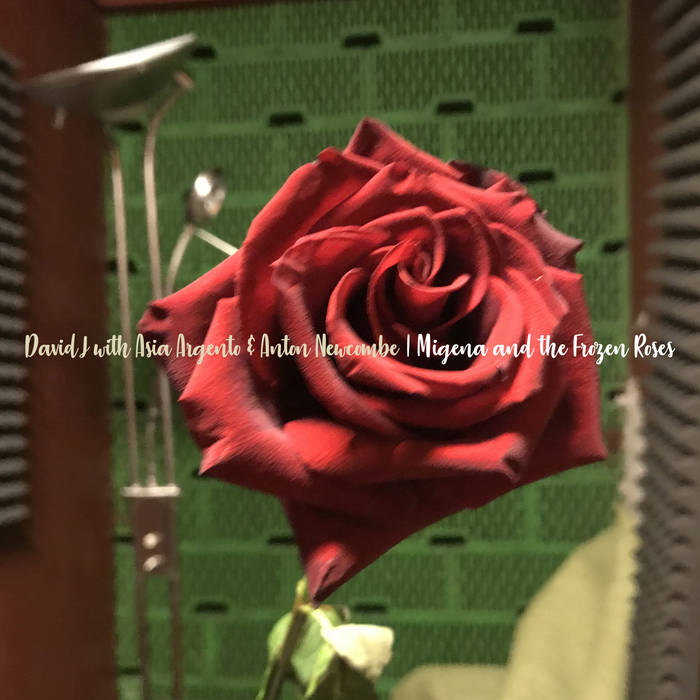 "I wrote the words to this while on tour, on a flight from Turin to Berlin, on my way to stay with Brian Jonestown Massacre mastermind, Anton Newcombe. We had planned to record something new together in his studio. This collaboration instantly clicked. Anton recorded a basic beat and we came up with an improvised piece based around my acoustic guitar part. Anton works very quickly and we kept on bouncing ideas off of eachother. Taking it in rapid turns to add another layer to the track. While playing live I had been experimenting with a Fishman AFX delay pedal which creates these wild echoed loops, so we laid down a couple of tracks of this, my guitar lying on the floor with me twiddling the knobs on the old wobble box. Then, at Anton’s suggestion I added some distorted bass guitar. I have to say that I was enormously impressed with Anton’s musical invention. Everything he came up with, keyboard parts, strings, percussion etc worked right away. After a few hours we had a very strong instrumental track simmering away. All it needed now was some vocals. Anton asked if I had any poetry and I so I grabbed my book with the Migena piece. The spoken word recitation worked perfectly over the music and we had it first take. It then entered my mind that this track would be a good vehicle for Asia Argento, the Italian actress, director and sometime musician. She and Anton had already worked together on her excellent album, ‘Total Entropy’ which I had played in it’s entirety before my show in Turin a few days before. Asia had approached me several years ago with a request that we work together. “David, let’s make art!” Well, now was the time! We texted her and it turned out that she was sick with a cold and in bed in New York City. Still, the lady was game. I asked her to simply write something in Italian about a red rose and then a yellow rose and to record her voice on her phone and send it to us in Berlin. This she did. We flew her very sexy throaty vocal (made even more husky by the cold) into the mix and with a little nudging by Anton it worked great. My spoken piece concerned a meeting that I had just had in Turin with a beautiful young Albanian girl. I love how this track turned out. Red roses all round!"
David J